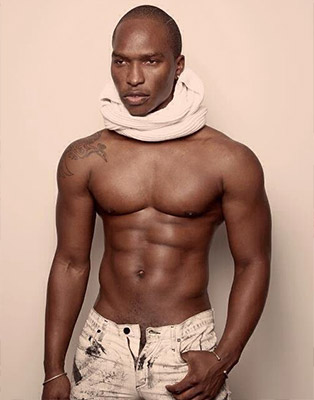 Braving possible persecution, three African men are set to compete in the 2015 Mr Gay World contest, being held in the Western Cape in April and May.

He said that while four spots are allocated to Africa in the contest every year, “we have to date never been able to fill the four slots because of the backlash the delegates could face at home.”

Kukkuk revealed that the event’s first-ever West African contestant will be 29-year-old Julien Mbiada from Cameroon.

Mbiada, who lives in Spain, is a human resources coordinator and model.

Zimbabwe’s delegate has yet to be announced, while South Africa’s representative will only be named when the 2015 Mr Gay South Africa title-winner is crowned in Johannesburg later this month.

South Africa has taken part in the international event for the last six years (winning the title twice) without incident, but some other African contestants have faced grave challenges.

Robel Gizaw Hailu, the Ethiopian delegate who took part in Mr Gay World 2012, was disinherited by his family and was threatened with being killed if he returned home. A student in South Africa at the time, his family cut him off because of his participation in the contest.

“His family stopped paying for his flat and he couldn’t return to Ethiopia under threat of death. Mr Gay World found him a job in South Africa and he’s still here after three years,” said Kukkuk.

Also in 2012, the Zimbabwean contestant, Taurai Zhanje, was forced to pull out of the event at the last minute after his mother received threats because of his participation.

“We have had interest from other African countries to take part, such as Tanzania and Nigeria, but after we explained to them that they will be in the media, they decided not to take the risk. We must prepare them to understand that there could a backlash,” Kukkuk said.

Despite concerns about the safety of the contestants, Kukkuk also highlighted the impact that the event can have in Africa, simply by putting the topic of LGBT rights in the spotlight.

“The Ethiopian regime had firmly denied that they had any gay people in the country, but the 2012 delegate went on the radio and said ‘that’s not true there are many like me.’”

“And even though it was shot down, it was the first time that gay rights had been discussed on national radio in Ethiopia. The aim is to get debate started where there was none,” said Kukkuk.

Mr Gay World will be co-hosted in Knynsa (during the Pink Loerie festival) and Cape Town from 27 April to 3 May. About 30 contestants from around the world are expected to take part. For more information, visit www.pinkloerie.co.za.

Below is an exclusive sneak peak at some of the delegates confirmed for this year’s Mr Gay World contest.