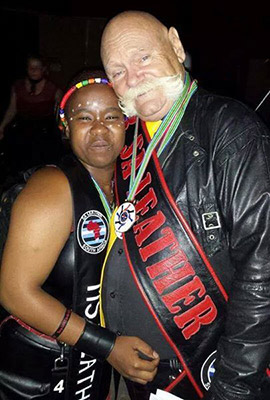 For the first time in Africa, a gay leather title has been awarded to a black woman.

It was the first time in the event’s four year history that women were allowed to enter the contest after the SA Leather organisation opened up its membership to all in the LGBTI community.

Jaco Lourens, Chairman of SA Leather, said he was delighted with the outcome. He confirmed that the group was the only leather organisation on the continent.

“The leather community has always been perceived as a white male dominated part of the gay community. Selogadi becoming the first person of colour to win a title breaks down all the stereotypes and barriers,” he said.

“We are so happy and proud for her to be our first Ms. SA Leather,” Lourens added.

A performance artist and activist from Tshwane, Mampane told Mambaonline that, “it is an honour and absolute pleasure to be given the opportunity to serve my community in this way.”

She went on to say that she hopes to address the “vast under-representation of Black people, especially womyn, people with disabilities and people from lower-income communities” in public and positive queer spaces in South Africa. Mampane also aims to open up the LGBTI community to “experience the support, strength and love of the leather community.”

She added: “In addition, I’d love to share our community’s sex positive ethos, which encourages consensual and explorative safe play within a broader supportive community. During my term, I plan to serve with dignity, love and respect: we’re here, we’re queer and we’re ready to play!”

Groenewald, who is Lourens’ partner, was a last-minute contestant, entering as a substitute three days before the competition after one of the finalists pulled out. The Capetonian is co-founder of an NGO that is working to open the first LGBTI home for seniors in South Africa.

“Herman has been with the organisation since day one,” said Lourens. “At 68-years-old, he’s also breaking down stereotypes. He shows that you’re never too old to do something.”

With her title, Mampane will have the opportunity to travel to the US in April to represent South Africa at the International Ms. Leather (IMsL) in San Jose, California.

Groenewald will take part in the International Mr. Leather (IML) contest in Chicago in May. Previous South African representatives have all reached the top 10 in that competition.

Saturday’s winners were chosen through online voting and by a panel of judges, including international leather representatives from the US and Germany who attended the Cape Town ceremony.