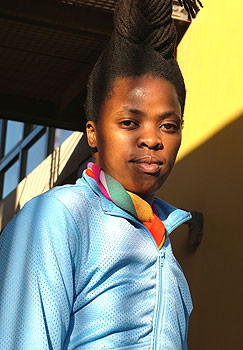 South Africa’s Zanele Muholi is once again being honoured for her ongoing series of intimate and striking portraits of lesbian women.

Muholi has been shortlisted for the European Deutsche Börse Photography Prize, which awards contemporary photographers who have made a significant contribution to the medium of photography in the past year with a £30,000 prize.

She is one of four shortlisted artists, including fellow South African photographer Mikhael Subotzky, who’s been recognised for documenting Johannesburg’s Ponte building and its residents.

A self-titled “visual activist”, Muholi has been selected for her new black and white photo book Faces and Phases 2006 – 2014, which offers “an insight into black LGBTI identity and politics in post-apartheid South Africa.”

Said the prize organisers: “Emphasising a conceptual and personal approach, the uncompromising images and accompanying first-person testimonies reflect the impact of homophobia, discrimination and violence, most notably the ‘curative rape’ of black gay women, which often results in murder.”

Works by the shortlisted photographers will be exhibited at The Photographers’ Gallery in London, and subsequently presented at the Museum for Modern Art in Frankfurt.

In 2010, South Africa’s then Arts and Culture Minister Lulu Xingwana famously stormed out of an exhibitionfeaturing Muholi’s photos of lesbian women embracing, describing the images as “pornographic”.

Muholi has received a string of awards and prizes for her work. In 2013 alone, she won four major international prizes. Last year she was also made honorary professor of the University of the Arts/Hochschule für Künste Bremen, and in 2009 was the Ida Ely Rubin Artist-in-Residence at the Massachusetts Institute of Technology (MIT).