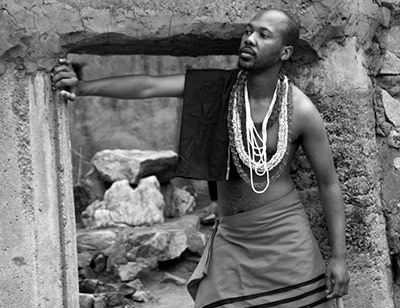 The performer has broken new ground by singing self-penned songs about same-sex love, longing and discrimination in his home language of Xhosa.

He was recently announced as a finalist in the category of Humanitarian Songwriter of the Year for the 9th Outmusic Awards, which takes place on 19 January in the US.

The event, run by the LGBTQ Academy of Recording Arts (LARA), aims to promote the advancement and appreciation of LGBTQ music.

Majola is hoping to travel to the Big Apple to attend the event, but lacks the funds to do so. While his work has been critically praised, the outspoken nature of his music has meant limited mainstream support.

“I’d like to attend because it could be an important platform for visibility for African LGBT artists,” he told Mambaonline.

While he’s received support from Constitutional Court Justice Edwin Cameron in securing accommodation in New York, Majola is hoping that another sponsor or donor will step forward to assist him with the airfare and other costs.

“It’s important to honour the nomination by being there, and I’d also like to meet those people who are working towards the same vision of equality and removing stigma and shame. We are looking for the same thing – dignity,” he explained.

Fellow South African singer Toya Delazy has been nominated in three categories for her song Forbidden Fruit: Best International Song, Single of the Year and Best Alternative Song. She told Mambaonline last year that she too hoped to attend the awards.

If you are able to assist Majola with his trip, please contact him on majola.jolinkomo@gmail.com.